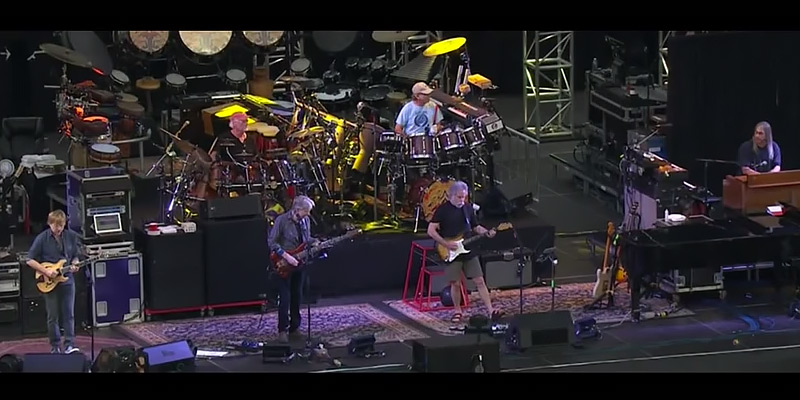 I have seen the future of religion… and it looks a lot like a Grateful Dead concert. With all of the hype and hullabaloo surrounding the Dead’s 50th anniversary and recent concerts, it is easy to discern some features of America’s new spiritual landscape in the testimonials and commentaries pervading the media coverage of this historic moment. Talk of the band’s “magic,” the “mystical” experiences some have had at the shows, the “moral” lessons that can be learned from the band, and other cultural realities associated with the life, and afterlife, of the Dead is quite overwhelming.

The paranoid conservative Christians in this country should be scared about the present and future state of religion. They are right about the radical changes in the religious temperaments and sensibilities of Americans now more fully recognized by the skyrocketing number of “nones,” those claiming no religious affiliation, in surveys and polls. When it comes to meaning and purpose, inspiration and transcendence, it’s Jerry’s music over Jesus’s ministry for many American Deadheads.

I don’t have to labor with the argument: shows are transcendent revivals; audiences are bonded communities; songs are luminous revelations; band members are deified; sacrifices are joyously transformative; identities are forged deeply; crowds are animated by collective effervescence. Sometimes followers find God, but as we now know, that particular feature is not necessary for counting something as religious. The proof of the sacred is always in the pudding, and a quick glance through some of the religious language used by devotees gets to the heart of the matter, provided byReligion Dispatches or BuzzFeed, for example.

Or you can certainly hear it in the language of band members themselves, some of whom preach a gospel that resonates with fans and fanatics alike. Bob Weir, for example, speaks of the “eternal moment” that occurs in some jams: “When your body becomes electric, and all the other stuff you bring the party is sort of left behind because you are there in the moment and time drops away, space drops away, you sort of ascend to another place.” Phil Lesh, elaborating on the same theme, the flow and energy of the music: “That’s what’s created when we are creatively improvising, and the flow is really happening. When we are actually channeling, we are opening that pipeline to another reality that speaks to us.” Or the cosmic wisdom of drummer Mickey Hart: “Music creates a virtual space. You are creating another consciousness and a whole other architecture when you are play music. That’s the power of music.” These are only a few snippets easily at hand. And don’t get me started about responses to Jerry Garcia’s death…

What we are witnessing now is not quite the Second Coming, but the return of the Dead and the cultural celebration of this moment portends a new religious day — for many, it is morning in spiritual America. Ironically, even as the Dead allow us to see this future more clearly, it is also true that the Dead’s initial appearances and flourishing in the 1960s and early ’70s set the stage for what is happening now. Indeed, the countercultures they were associated with at the time and that permeated the popular media of the day planted the cultural seeds bearing fruit today. All the drugs, music, dancing, experimentation, tripping, love, and freedom made a deep, impressive mark on American religious cultures.

The Grateful Dead is a band, not a religion. They are not a movement in and of themselves, but part of a cultural and religious revolution initiated in that pivotal era. Over the decades the band’s music and performances and personalities have been a sacred source of meaning and action in the lives of many. The rise of the Religious Right was in part a recognition that the spiritual lives of Americans were threatened by the perceived hedonism, heathenism, paganism, and atheism often associated with the Grateful Dead and others of their ilk. Unfortunately for them, in the long run, their longstanding authority on sacred matters is now being usurped by the spiritual inspirations ignited and sustained by music, lyrics, and concerts.

The common riff on “long strange trip” in the media doesn’t quite capture the relatively brief, familiar story embedded in the larger cultural history of their time.

Gary Laderman is the Goodrich C. White Professor of American Religious History and Cultures, and Chairperson of the Department of Religion at Emory University. He has written on other topics besides death, including popular culture, science, sexuality, and drugs. Laderman was one of the founders of Religion Dispatches and is currently Editor of Sacred Matters.