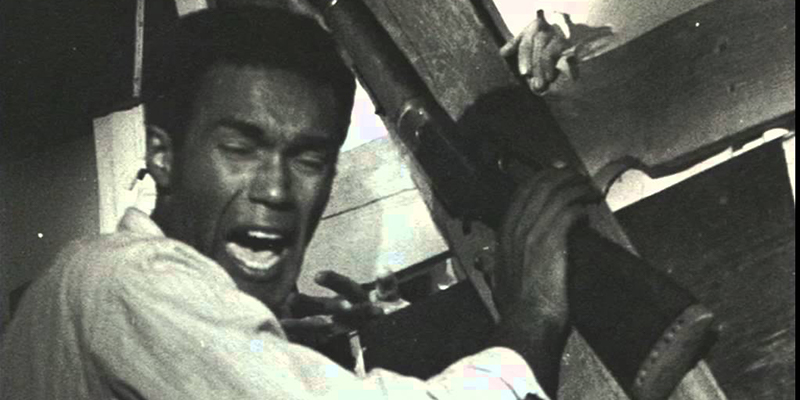 “A monster cannot be allowed to live.”–Edward Ingebretsen, At Stake (2001)

There’s a moment in George Romero’s Night of the Living Dead (1968), in which I always try to convince myself that if I quit watching then everything will turn out okay.  If I don’t witness what’s to come, it won’t happen, right?

Ben, the African-American lead, has survived the night filled with ravenous things, resurrected corpses, but everyone else has not. The white characters are all dead. Barbra attacked and killed by monster that used to be her brother Johnny. The young couple, Tom and Judy, die in an explosion and their remains become a barbecued feast for the things. The Coopers, Harry and Helen, both ended by their bitten daughter Karen.

Ben is the only who made it out alive; he survived the traumatic night.

Every time, I watch Night I wish that the movie ended with Ben’s survival. I wish Ben would walk away into the new post-apocalyptic world, find his place, and live a long life. And then, the movie would fade to black. I wish for a hopeful ending rather than the tragic one that follows.

A posse of white hunters comes upon the house where Ben made it safely through the night. They shoot Ben before even checking to see if he remained human. They assumed he was a thing, a monster, so they killed him. As the credits roll, there’s an image of the dead Ben being lifted onto a car one of the white hunters in a police or sheriff’s uniform. It looks so similar to the lynching photos of the early twentieth century that my stomach starts to seesaw and heave.

Romero likes to claim that Night was not supposed to be a “racial piece.” He didn’t intend for his film, the start of the modern zombie film, to overtly offer any commentary on race despite its filming in 1967 and its proximity to the Civil Rights Movement. When I watch the film, I cannot help but see the commentary on race, racism, and the lingering impact of white supremacy. Ben could survive flesh-devouring monsters, but he couldn’t survive the white racism that imagines and portrays black people as less than human, as monsters.

I find myself thinking of Night and Ben a lot lately. I remembered Ben when I heard that a Tulsa police officer, Betty Shelby, shot and killed Terence Crutcher, even though his back was turned and his hands were up.  I remembered Ben when I read that a Charlotte police officer shot and killed Keith Lamont Scott, who was in his car waiting to pick up his son up from school. His wife of 20 years, Rakeyia Scott, recorded took video with her cellphone. I read the transcript of the video, in which she pleads with the cops to not shoot her husband. “He better not be fucking dead,” she says to the cops.

I can’t bring myself to watch the videos. I can barely watch Ben die in Night, so I refuse to watch black people be killed by white police officers in real-time on either dash cam or cellphone video recordings.

In this age of white police killing black people, Romero’s unintentional message about racism still resonates today, though I wish it wouldn’t. I wish the film were less relevant with every passing year. Yet Romero shows us in a film about zombies the high costs of dehumanization in the form of racism. When we imagine other people to be less than human, less like us, they die. We create them as monsters, and then, we find ways to destroy them.

The most recent series of police shootings make me think of monsters, not just the zombies I usually write about, but the presence of monsters that lurks and dwells in our everyday speech and interactions. The rhetorics of horror are commonplace. They appear pervasive and inescapable because horror is filmed, televised, and tweeted day in and day out. Another day, another police shooting, another staggering loss, another glimpse at racism’s staying power and its continued horror.

As I read yet another article about a black person being killed by white police officers, I feel like I’m running out of words to express the commonness of the horror. These acts feel unspeakable, but never unimaginable. How can we not imagine them when we see death and trauma on auto play? The language of horror slips off our tongues when we have something to speak that feels unspeakable. More dangerously, the language of horror gets used to justify violence and harm and create distance between one another, marking who counts as human and who never quite does and us.

People become monsters in a single utterance. Officer Shelby claimed that Crutcher made her fear for her life; another officer in a helicopter above described Crutcher as “a bad dude.”

How do we create monsters? And ultimately, how do we destroy them? Creation and destruction are tangled together, fiercely dependent on one another. Monsters, and killing monsters, beg for explanation when I fear that I have no words to give that will change anything.

Almost two years ago, I was heartbroken over a grand jury’s decision to not indict Officer Darren Wilson for killing Michael Brown. I’m still haunted by the suffering of Brown’s parents and all the black parents that fear the same fate for their children. I still remember the autopsy sketches, the pain etched into his mother’s face, and the wounded bodies of protesters in Ferguson. White skin offers protection that Brown was never granted.

The monsters keep appearing. They also keep getting slayed.

In his testimony for the grand jury, Wilson described Brown as “it looks like a demon.” Dexter Thomas notes the dehumanizing language that Wilson employs with both “it” and “demon,” which resonates with a larger history of denying the humanity of African Americans. Thomas describes how the events in Ferguson feel like a bad movie playing out exactly like we feared it would. Spoilers aren’t an issue, if the pattern is the same.

Finbarr Curtis also picked up the reliance on the demonic in Wilson’s testimony. He writes:

The image of a demon is an apt one, but not because of anything that possessed Brown.  Wilson’s demon, as with most demons, expressed his deepest fears.  In Michael Brown’s face, Wilson saw the embodiment of all that he found impenetrable, unintelligible, and terrifying in his daily work amidst the black humanity of Ferguson.

Wilson made Brown into a demon, a monster, as a method to assert the rightness of shooting him. I can comprehend this sentence. I can read it aloud. Yet, I also can’t comprehend it. I refuse to let it make sense. Making monsters is always already the defense for the indefensible. There’s no justice in making someone a monster. There’s only peril.

I’ve returned to Edward Ingebretsen’s At Stake: Monsters and the Rhetoric of Fear in Public Culture for answers over and over again since the murder of Michael Brown. Ingebretsen understands intimately the high cost of creating monsters and recognizes the ethical stakes of his project. “Monsters,” he writes, “warn by example: they are themselves terrible consequences” (xiv). In their most basic function, monsters warn. They warn us of our future fate. They teach us who we need to fear. They crystallize the peril that lurks in society and reflect it back to us. They become the boundaries of what we consider human by showing us what we are not. Monsters become the mechanism by which a community reinterprets itself (4). They are the bearers of cultural trauma, no matter what they wanted to be instead.

The monster also emerges as a “tactic, a figure of speech used to demonize and to alienate” (8). Horror language shifts out of movies into the realm of the everyday, and we hardly ever stop to think about what this means. What have we lost if the rhetoric of monsters becomes shorthand for our ethical judgments? Monster-talk appears everywhere, no longer bound by the fictional spaces it used to inhabit. Monsters appear among us, and people label them haphazardly and often.

Yet, monster rhetoric is so very dangerous, but Ingebretsen shows us the consequences for individual lives. He guides the reader through the process of how monsters are created, maintained, and destroyed monsters. When we create monsters, he notes, we make them no longer human. He writes, “And because they are no longer human, we can act toward them anyway we like” (11). We take people, dehumanize them, and treat them terribly. Harm doesn’t matter if the victim is no longer human. A monster is meant to be slayed, after all.

Darren Wilson described Michael Brown as a monster, which might or might not be how he actually felt. Perhaps, his narrative about a demon was crafted for the audience that was the grand jury (and a larger public). I can’t know. What I do know is how much his reliance on the language of the demonic, the monstrous, is a problem. “It looks like a demon,” Wilson says of another human being. These five words become the justification for taking someone’s life. This should give us pause. This should terrify us.

Ingebretsen reminds, “Monster-talk might be cheap, but it is easy to use and takes its toll in human lives” (9). He warns us again and again that the monster is made to be staked. Every time, we employ the monstrous to describe humans we take their lives in our hands.

In his testimony, Wilson made a black teenager into a monster. He deprived Brown of his life and then his humanity, and he was not indicted. In her description of Crutcher, Shelby plays up her fear for her own life, which is her attempt to justify taking the life of a black man with his hands up.

Ingebretsen asks, “Why do we make monsters; of whom, really are we afraid? (12). I’m asking myself this question again and again. Maybe we all should.

2 thoughts on “Staking Monsters: Killing the Racist Trope in Horror and Reality”