7 Questions for Lerone A. Martin

In our interview series, “Seven Questions,” we ask some very smart people about what inspires them and how their latest work enhances our understanding of the sacred in cultural life. For this segment, we solicited responses from Lerone A. Martin author of Preaching on Wax: The Phonograph and the Shaping of Modern African American Religion (NYU Press, 2014). 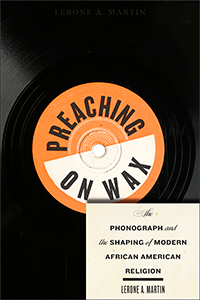 Preaching on Wax grew out of my own experience with mass media religion and my dissertation research. I was raised in a home where mass media religion and the accompanying spiritual commodities were a constant. African American and white televangelists occupied spaces of unquestioned authority in our household. I attended Oral Roberts University for my first year of college where this worldview was further affirmed. I grew up thinking mass media religion was the lifeline of authentic Christianity.

However, I discovered that my religious experience was very peculiar when I transferred to Anderson University and matriculated to Princeton Theological Seminary. Many of my peers were unfamiliar or worse disgusted with the spiritual commodities I cherished as essential and the religious broadcasters—icons I had always believed represented the pinnacle of Christian ministry—I viewed as religious authorities. As I entered graduate school, I was drawn away from said faith commitments, even as I remained very interested in learning more about the history of religious broadcasting in America. In particular, I was curious as to how religious broadcasting and commodification became so prominent and revered in some faith traditions and almost invisible and reviled in others. This, I decided, would be my dissertation project.

During my research, I discovered that most scholarship on religious media focused primarily on the mediums of print, radio, and television. Moreover, these historical accounts almost exclusively detailed the experiences of white Protestants, while simultaneously ignoring race as an analytical category. This led me to write my dissertation and ultimately Preaching on Wax: an interwar narrative that de-centers whiteness and radio in the history of American religious broadcasting by explaining how black clergy, largely marginalized from radio on account of racial discrimination, made the phonograph a vital medium of religious broadcasting, a phenomenon I have dubbed phonograph religion.

The concept of phonograph religion is influenced by the work of Diane Winston and John Giggie. The marketplace, while often perceived as the exclusive domain of the secular, can actually be viewed as a site of religious revitalization and vitality. Indeed, Winston and Giggie have posited that the growth of commercial culture within America’s burgeoning cities did not undermine religion or signal the triumph of secularization. Rather, religion has thrived and continues to do so by appropriating prevailing aspects of commercial culture, particular in the realm of popular entertainment.

This was certainly the case during the great migration of the interwar period. The marketplace helped to spur Protestant identities and was a site of religious revival. Black Protestant clergy took cues from popular jazz and blues artists and the marketplace, and partnered with the titans of the record business (Victor-RCA, Columbia, and Paramount, etc.) to record and sell their sermons. These gospel labors aimed to stave off the “sinful” influence of jazz and blues music, stoke a revival of traditional Protestant authority and devotion, and direct the increase in recreational spending towards Protestant institutions. Record labels, motivated by the desire to expand their market shares, flooded the marketplace with advertisements for the unprecedented aural spiritual commodities. Consumers greeted them with enthusiasm. The faithful purchased the sermons at a staggering rate, at times recorded homilies outsold leading entertainers of the day, including Bessie Smith and Ma Rainey.

Phonograph religion shaped religion in modern America in three primary ways. First, it made folk preaching a popular mass-produced aural commodity. Radio sermons could be experienced once. Phonograph sermons, however, were packaged and could be experienced time and time again. Moreover, unlike written sermons, popular recorded sermons had a plain folk appeal and focused on the quotidian, while eschewing astute theological discourses. In addition, they were marked by the use of metaphors, similes, double descriptors (low-down), and delivered in a metrical, tonal, and rhythmic chant. Labels such as Victor-RCA, Columbia, and Paramount manufactured, advertised, and sold the sermons according to modern technology and tastes. The sermons were mass-produced in a cost effective manner, image based advertising on hand bills, posters, newspaper advertisements, magazines, and booklets. They were then sold in record shops, shoe parlors, independent “mom and pop” stores, chain stores, and department stores, and mail order catalogues. Phonograph sermons were seemingly ubiquitous in modern America.

Second, phonograph religion drafted the blueprint for successful contemporary religious broadcasting. Modern religious broadcasting, as religion scholar Jonathan L. Walton has noted, is not just the widespread utilization of prevalent sound mediums for proselytization, but also includes a host of industries that aid clergy in producing, merchandising, and marketing spiritual wares. Indeed, the phonograph was a popular sound medium, while the phonograph industry quickly commodified the sermons as essential to personal flourishing, all at a significant profit.

Finally, and closely related, phonograph religion created the commercial celebrity preachers in black Christian practice, and in the process altered black religious authority. The protracted experience of black emancipation and citizenship circumscribed black participation in the marketplace. However, the popularity of phonograph religion made many black sermon recorders celebrity preachers, ministers who enjoyed extensive fame, wealth, and social influence based on the success of the spiritual commodities they produced and promoted. The study of American religion has traditionally positioned such iconic status as an anomaly and departure from traditional black Christian practice, seeing celebrity as the realm of white Protestants or black urban “sects” and “cults.” Some argue that the presence of present day black celebrities then, is a new phenomenon and signals the emergence of a new black preacher or a new black church. However, phonograph religion transfigured Baptist and Pentecostal clergy into mainstays of black commercial celebrity culture and black Protestant experience. The phenomenon then is not new; it simply has not received the same scholarly attention as racial uplift and community mobilizing in black religious experience.

Commercial celebrity aided black clergy claims of authority and influence during the rise of black cultures of urban professionalism. To be sure, some black clergy pursued education, elected office, and associations with elite organizations to bolster their standing. Popular phonograph preachers, however, eschewed such channels basing their status on broad commercial appeal and the spoils of the same. This altered not only the sources and channels of black clerical authority but also its tone. As the iconic preachers of phonograph religion wedded their cultural and social clout to the market—rather than profession, custom, and education–their ability to authoritatively address and protest prevailing social arrangements was amplified and attenuated according to the dictates of the market.

The two books that served as intellectual models for me were Judith Weisenfeld’s Hollywood Be Thy Name: African American Religion in American Film, 1929-1949, and Wallace D. Best, Passionately Human, No Less Divine : Religion and Culture in Black Chicago, 1915-1952. These two books provided much guidance and conversation, during the writing and revising process.

Without a doubt, inspiration for the book came from my paternal and maternal grandparents: John A and Agnes S. Martin; and James and Katherine Cosper—all urban migrants whose faith and insistence that they were indeed human and created equal guided me, while the work ethic and love of my parents, Larry and Rose Martin, fueled me.

The most challenging aspect I encountered in writing the book was, despite much effort, I was unable to find someone who was willing to be interviewed concerning their own personal experiences with buying recorded sermons during the interwar period. Ultimately written accounts and oral history archives, while robust, had to suffice.

I have been particularly excited to see the interests jazz and blues scholars have taken in the book as well as the general public. I have been very flattered by such. See Boston Globe, Baltimore NPR, or Saint Louis NPR

Moreover, I have been pleasantly surprised by the enthusiastic response I have received from the free online instructor’s guide I drafted for the book.

I am currently working on a project tentatively entitled J. Edgar Hoover’s Stained Glass Window: The FBI and Christian America. The project aims to unearth the FBI’s varied relationship to religion in America.