Religion and the Black Power Movement: 7 Questions for Kerry Pimblott

In our interview series, “Seven Questions,” we ask some very smart people about what inspires them and how their latest work enhances our understanding of the sacred in cultural life. For this segment, we solicited responses from Kerry Pimblott, author of Faith in Black Power: Religion, Race, and Resistance in Cairo, Illinois (University Press of Kentucky, 2016) .

What sparked the idea for writing this book? 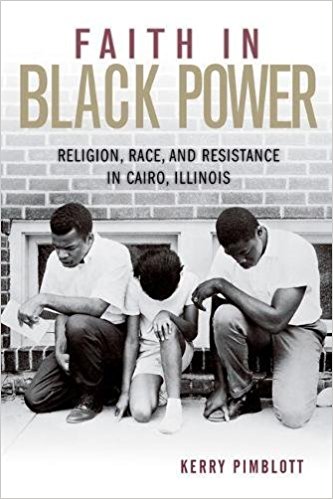 The book was born out of conversations I had with scholars and activists during my doctoral studies at the University of Illinois in the early 2000s. I have always been interested in how religious belief informs politics. At that particular moment, I was considering writing my dissertation on the relationship between Black religious traditions and the radical movements of the interwar period, but after reading the excellent work of Mark Fannin, Robin Kelley, Jarod Roll, and others, I realized I was covering well-trodden ground. At the same time, I was taking a graduate seminar with historian Clarence Lang on the Black freedom movement and was struck by the transformations taking place in that dynamic field. Of most interest were revisionist accounts of Black Power that moved beyond a top-down approach to recover grassroots struggles in communities across the nation. When I talked with Illinois-based scholars and activists about Black Power they would often mention Reverend Charles Koen and the United Front organization of Cairo, Illinois, as an important but forgotten local struggle. Many had travelled to Cairo in the 1960s and 1970s and recalled attending mass meetings at St. Columba’s Church where the United Front’s symbol of a revolver atop a King James Bible was displayed prominently on the altar. That symbol resonated because it conflicted with assumptions of Black Power as a secular struggle. What, I wondered, did this symbol mean and how might it complicate our understanding of the relationship between Black Power and African-American religious traditions?

How would you define religion in relation to your work? Where do you see the sacred or sacred things in this book?

The book is about the role of African-American religion – inclusive of ideas, practices, and institutions – in the Black Power movement. Historians have shown that Black churches and theological traditions were vital to earlier civil rights campaigns, particularly in the U.S. South. However, there is a prevailing notion that Black Power activists’ abandoned these ties in favor of secular humanism or alternative religious traditions. Certainly there is some truth to this.

The critique of Christianity as the “white man’s religion” offered by Nation of Islam leaders Elijah Muhammad and Malcolm X resonated with a growing number of African Americans. Cultural nationalists Maulana Karenga and Amiri Baraka developed Kawaida as an alternative African-centered spiritual framework. But, most African Americans remained within the evangelical Protestant tradition. My book wrestles with the question of how Black Power activists reconciled the Black Nationalist critique of Christianity as a Eurocentric tradition with their need to build effective movements in communities where their support base was solidly within the historically black Baptist and Methodist traditions. I argue that this question is especially important to consider when examining Black Power struggles in southern and borderland communities less affected by the waves of migration and industrialization that elsewhere contributed to religious diversification and secularization.

Can you summarize the three key points you’d like the reader to walk away with when finished?

Who were intellectual models or inspirations for you as you wrote this book?

During the course of writing the book I had the good fortune to meet and interview many former United Front members. Hearing their stories about the Cairo movement and their continued involvement in battles for racial change remains my primary inspiration. In terms of intellectual models, my work combines the African-American urban history approaches of Joe Trotter with the latest Black Power scholarship by Matthew Countryman, Clarence Lang, Peniel Joseph, and Donna Murch among others.

What was the most difficult thing about writing the book? Did you encounter any unexpected problems or challenges?

I think that one of the reasons the Cairo movement hasn’t received more attention is because of the unique challenges historians face in performing research on the city. As NPR’s Kirk Siegler recently noted, Cairo is located in one of the fastest depopulating counties in the United States. Over the past three decades half of Cairo’s residents have left the city making it very difficult to locate and interview former activists. Declining tax revenues and a lack of governmental support has also impacted public services and historical preservation, making traditional sources on the Black freedom movement trickier to access. There is no central repository for the United Front’s organizational records and newspaper, which are dispersed across the country in numerous archives, libraries, and private homes. I was greatly aided in my own research efforts by the staff at Cairo City Hall and archivists and librarians in Illinois, Michigan, Missouri, New York, and Washington D.C.

What’s the most unexpected response, critical or positive, that you’ve gotten about the book?

The most unexpected response to the book has come from commentators and journalists responding to recent developments in Cairo. In the months immediately following Faith in Black Power’s publication Cairo’s Black working-class residents faced new challenges as the Department of Housing and Urban Development (HUD) announced that it would be relocating 400 residents due to unsafe conditions in the McBride and Elmwood Place public housing complexes. It appears that most of those affected will be forced to leave the city due to a lack of alternative and affordable housing options. Many of these families have lived in Cairo for generations and their forced departure (constituting one-fifth of the city’s total population) will have a devastating impact on the city’s already limited public services. In this context, Faith in Black Power provides important historical context, illuminating longstanding battles over equitable housing and the crucial role of Cairo’s public housing residents to building movements for racial change and social justice.

With this book done, what’s up next for you?

Authoring my first book taught me a lot about my own motivations as a writer. When I sit down at my desk each morning I find that I want to tell stories about ordinary people who have devoted their lives to building more just and equitable communities. What spurs them to get involved in social movements? How do they sustain their involvement over the long haul and against the fiercest odds?  Some people – like those in my first book – do this work primarily at the local level, building movements in the communities they were born and raised and measuring success in tangible, concrete gains to the quality of education, political power, and economic opportunities. Others operate through complex international political networks, seeking to connect local grievances to global solidarities. These types of organizing present their own unique challenges and offer important lessons to contemporary movements. My latest project focuses on a group of Black women activists who were involved in transnational radical movements in the 1950s, 1960s, and 1970s. I am interested in how their activist travel experiences and sojourns in the Global South particularly shaped their identity and political outlook.

Kerry Pimblott is a Lecturer in International History at the University of Manchester. She earned a B.A. with First Class Honours in American Studies from King’s College London and a Ph.D. in History from the University of Illinois at Urbana-Champaign. Her research interests include African-American history, Black social movements, urban history, working class history, and religious cultures and institutions. Pimblott’s recent publications include Faith in Black Power: Religion, Race, and Resistance in Cairo, Illinois (Lexington: University Press of Kentucky, 2017) and chapters in The Pew and the Picket Line: Christianity and the American Working Class (Urbana: University of Illinois, 2016) and The Oxford Handbook on Religion and Race in American History (forthcoming 2018).

PrevPreviousReligion in Hip-Hop, Part 2: Unpacking the Methodology
NextFrom Job to Kevin: Scripture and Scripturalists in the LeftoversNext