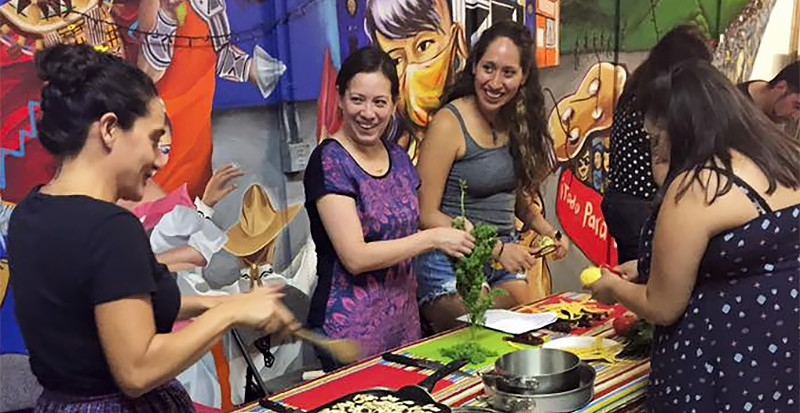 Lara Medina While the majority of Chicanas and Latinas participate in religious traditions that continue to attempt a male monopoly over the sacred, many others turn to traditional Indigenous ways that honor the sacredness of the universe, of women, and the ancient Mesoamerican tradition of communicating with the divine through the arts and through community. But while these women are returning to a traditional path, they are also creating a new one in response to societal marginalization, neocolonialism and ongoing racial, gender and sexual oppressions in and beyond Chicano and Latino communities. Mujeres de Maiz, a twenty-year collective of women of color artists, carries on the legacy of Native women who create autonomous sacred space to share their arts, words, music, and wisdom. Their actions strive to maintain balance in themselves, their communities and our universe and reflect what Native scholar Gerald Vizenor calls “survivance,” or “the state of being that encompasses more than physical survival but an active sense of presence, the continuance of native stories, not a mere reaction…Native survivance stories are the renunciation of dominance, tragedy, and victimry.” Mujeres de Maiz tells the stories of Indigenous identified Chicanas (Xicanas)[1] and their allies by drawing from ancient knowledges put through the sounds, symbols, and colors of twenty-first century urban life. In doing so they offer us a powerful message: They are strong women of color building strong communities and shaping the next generation to resist the consequences of neocolonialism through creativity, organizing, and a reclamation of Indigneous knowledges.

Their identity as “urban Native spiritual/cultural/political women artists” committed to socio-political justice and self and community empowerment emerged from the marginalization they experience as brown women in white America and the repression of Native peoples globally. Inspired by the 1994 Zapatista uprisings and equipped with their own community organizing experience, two young urban Xicanas in Los Angeles, Felicia Montes and Claudia Mercado, decided to create a space where women of color poets, painters, and performers could express themselves and share their works privately and publicly. “If they didn’t tell their stories, who would?” (Zine: Toltecayotl Cihuatl, no. 4 pg. 2). Other mujeres shared their vision and in 1997, Mujeres de Maiz self-published a grassroots ‘zine’ and produced a one night multi-media performance titled “Birth of La Diosa de Maiz.”[2] Since then, women of African, Asian, Arabic and Latina bloodlines have joined with Xicanas from the urban jungle to express what art historian Sybil Venegas calls a “sacred right of self-preservation.” These women are linked by a commitment to use “art as an educational tool for resistance, healing and change” (Zine no. 4, p. 3). Since its founding, Mujeres de Maiz has produced thirteen zines, fifteen multi-media live art shows and several community conferences reaching out to intergenerations of young girls and their mothers around topics related to physical health and emotional well-being. They have touched and healed the hearts, minds, and souls of thousands of Xicanas/os and their allies. After attending a Mujeres de Maiz event, one leaves not just having been entertained, but rather having been touched deeply in one’s being, affirmed in one’s feminist, cultural and political identity, and healed from the pain of not seeing oneself on stage in the public arena. Mujeres de Maiz represents all of us: tu eres mi otro yo, In Lak’ ech.[3] Their identity as urban Native women, straight, queer and overall gender non-conforming, grounded in Indigenous values, epistemologies, ceremony, and belief in the ancient goddesses-makes public a cultural and spiritual identity that was meant to disappear under colonialism. Internalized racism among communities of color has made it disadvantageous to be una india/un indio.[4] The women of Mujeres de Maiz, many who are now mothers of young children, are committed to raising the young ones according to Indigenous values of self-respect, self-determination, interdependency, reciprocity, the centrality of women, the ancestors, and the cosmic forces. The phenomenal community response to their performances, art exhibitions, writings and workshops reflects a surviving Indigenous identity thirsty for the soul healing work offered by Mujeres de Maiz. In their own words, “what we are doing is transforming, healing ourselves, our communities and the world one poem, one painting, one performance at a time.”[5] Through the use of drama, humor, dance, music, poetry and visual art, Mujeres de Maiz offers a spiritual practice rooted in the ancient Mesoamerican tradition of communicating with the divine through the creative arts. For Mujeres de Maiz, it is through the arts that the healing of psychic, physical, and spiritual wounds takes place. As one observer comments in Zine no 4, these women “are our scribes, unearthing a different way of seeing, a different way of walking in this world.” Within their work, “the sacred and divine are incarnate…a seed in our struggle to remain human.” In recent years, Mujeres de Maiz has expanded their work to include the sponsoring of community workshops on a variety of decolonizing health and spiritual practices. Topics range from preparing Indigenous foods, to traditional birthing techniques, to reconnecting with the feminine energies of the universe. Their commitment to gather women together monthly to honor the full moon offers a collective ritual that reinstates women’s relationship to the sacred lunar cylce. Inviting community healers who are trained in specific healing modalities and making the workshops accessible to working class communities is a tremendous gift from Mujeres de Maiz. They are offering a pathway for individual women across generations to join a collective effort to truly decolonize bodies, minds, and spirit; how we live our everyday lives. Their commitment to transform and heal their communities expands as they themselves grow in healing knowledges.

My participation in Mujeres de Maiz events and workshops affirms the spiritual path I and many of my peers from the first Chicana movement generation began to walk on many years ago. Seeing myself reflected in the artistic representations gathered by Mujeres de Maiz provides a level of affirmation I could not conceive of as a much younger Chicana. Mujeres de Maiz has grasped the teachings of the ancient ones and the foremothers who in the 1970s began the arduous task of reclaiming our Indigenous selves, and they have carried it forward to a profound level of engagement. Their work affirms what me any my peers knew was the right path to travel to be able to return to our Selves. I am extremely grateful for the work of Mujeres de Maiz, for their learning traditional ways of healing, for bringing them to our youth and our communities, and to their commitment to the ongoing challenge of “decolonizing everything.”

Lara Medina is Professor of Chicano and Chicana Studies at California State University, Northridge. Her research focuses on Chicana/o religious and spiritual practices, religious history, and religion and social change. Her published work includes Las Hermanas: Chicana/Latina Religious – Political Activism in the U.S. Catholic Church (Temple University Press, 2004). [1] Chicana spelled as Xicana stresses the woman as Indigenous identified and claiming her Indigenous ancestries. [2] Birth of the Goddess of Corn. [3] You are my other self. [4] To be Indigenous. [5] Interview with Felicia Montes, September 2008.