In our interview series, “Seven Questions,” we ask some very smart people about what inspires them and how their latest work enhances our understanding of the sacred in cultural life. For this segment, we solicited responses from Benjamin R. Kracht, author of Kiowa Belief and Ritual (University of Nebraska Press, 2017). 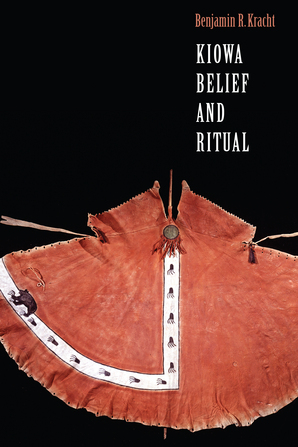 The genesis of this book dates to 1982-83, my first year of doctoral studies at Southern Methodist University. That spring, while serving as a teaching assistant for Introduction to Cultural Anthropology, Betty Tanedooah approached me after class, identified herself as a Kiowa, and then asked if her husband, Clifton Tongkeamah, could give a guest lecture. Afterward, Clif and Betty introduced me to urban Indian culture in Dallas, and inevitably, to Kiowa culture. After three years of traveling with Clif to powwows throughout Texas and Oklahoma, I decided to focus on Kiowa religion for my dissertation. I have conducted intermittent fieldwork among the Kiowas ever since. The corpus of the materials for the book were obtained in the summer of 1987 during a 10-week fellowship at the American Anthropological Archives, Smithsonian Institution, where I obtained copies of the fieldnotes compiled by members of the 1935 Santa Fe Laboratory of Anthropology field expedition among the Kiowas. During the summer of 1935, field party director Alexander Lesser and five graduate students—Jane Richardson (Hanks), William Bascom, Bernard Mishkin, Donald Collier, and Weston LaBarre—interviewed approximately thirty-five Kiowas born in the mid-nineteenth century about indigenous Kiowa culture. The fieldnotes, which remain largely unpublished, provided ample information for the reconstruction of indigenous Kiowa beliefs and rituals. Subsequent fieldwork and archival research augmented the fieldnotes.

Although the students had been mentored in paradigms ranging from historical particularism, culture change, functionalism, and culture and personality, the Santa Fe fieldnotes offer little analysis; they are organized depicting Kiowa religion as an institution composed of “religious conceptions, the vision complex, medicine men and sorcery, the Sun Dance, the Ten Medicine complex, cult movements, etc.” Based on the fieldnotes, religion is best described as a system of symbols rationalized by myth, and manifest in rituals. In chapter 2, Kiowa cosmology and cosmography are outlined, followed by a discussion of dɔdɔ, an animatistic power force permeating the universe that was accessible to certain individuals through the aid of animistic beings, as discussed in chapter 3. The notion of the sacred is apparent in the numinous relationships between humans and dream spirits, the “other-than-human-beings” who bestowed power to a select few.

First, indigenous Kiowa beliefs were steeped in the notion of dɔdɔ, an animatistic power force distributed throughout the three levels of the universe. Similar concepts of “power” are found throughout the Plains, and other indigenous North American cultures.

Third, indigenous Kiowa religious beliefs and rituals changed after confinement to a reservation in May 1875. By 1890, the Sun Dance collapsed, and the Kiowas sought power through prophet movements, the Peyote religion, Christianity, and the Ghost Dance.

I was largely influenced by James R. Walker’s Lakota Belief and Ritual (1980), edited by Raymond J. DeMallie and Elaine A. Jahner. DeMallie has been a friend and mentor since my undergraduate days at Indiana University; his thoughtful critique, editing, and coaching made this book possible. Many of the Kiowa elders I’ve known over the years have also inspired the book; every trip to southwestern Oklahoma rekindles a desire to write.

I jokingly refer to the book as a first child that became my third, because it has been thirty years in the making. Marriage, raising children, divorce, new class preps (I have taught eighteen different classes in twenty-five years at NSU), committees, meetings, and other unexpected life events usually took precedence over writing. Concomitantly, intermittent fieldwork kept adding new data and perspectives. For the last ten years, Ray DeMallie’s manuscript reviews resulted in several iterations; each revision moved me closer to the final product. His comments ranged from “keep plugging away,” progressed to “you’re getting closer,” to “it’s interesting,” and finally, to “it’s good.” By the time the manuscript was ready for submission, the project was delayed for another year. Persistence and perseverance have been my survival strategies. Nevertheless, this was an overall positive experience, and because of Ray’s tutelage, my second book was much easier to write.

Shortly after the book was published, several friends from different parts of the country sent their congratulations, which was pleasantly surprising. However, the biggest surprise came from a student in Bulgaria who contacted me through Facebook to say that he really loved the book. That really made my day!

My second book on Kiowa religion, Religious Revitalization among the Kiowas: The Ghost Dance, Peyote, and Christianity, will be published by University of Nebraska Press early next year. My next project involves editing and annotating the autobiography of a Kiowa woman born in 1912. I’m also working on a grant to conduct fieldwork in Zuni Pueblo.

Benjamin R. Kracht is Professor of Anthropology and Chair, Department of Cherokee & Indigenous Studies at Northeastern State University, Tahlequah, Oklahoma. His research agenda includes Plains ethnohistory, Plains Indian religions, medical anthropology, revitalization movements, and religious syncretisms. Kracht has conducted intermittent fieldwork among the Kiowas for over thirty-five years. He is the author of Kiowa Belief and Ritual (University of Nebraska Press, 2017), and Religious Revitalization among the Kiowas: The Ghost Dance, Peyote, and Christianity (University of Nebraska Press, 2018).