On Getting to Know the Seemingly Different: 7 Questions for Kyle Conway

In our interview series, “Seven Questions,” we ask some very smart people about what inspires them and how their latest work enhances our understanding of the sacred in cultural life. For this segment, we solicited responses from Kyle Conway, author of Little Mosque on the Prairie and the Paradoxes of Cultural Translation (University of Toronto Press, 2017). 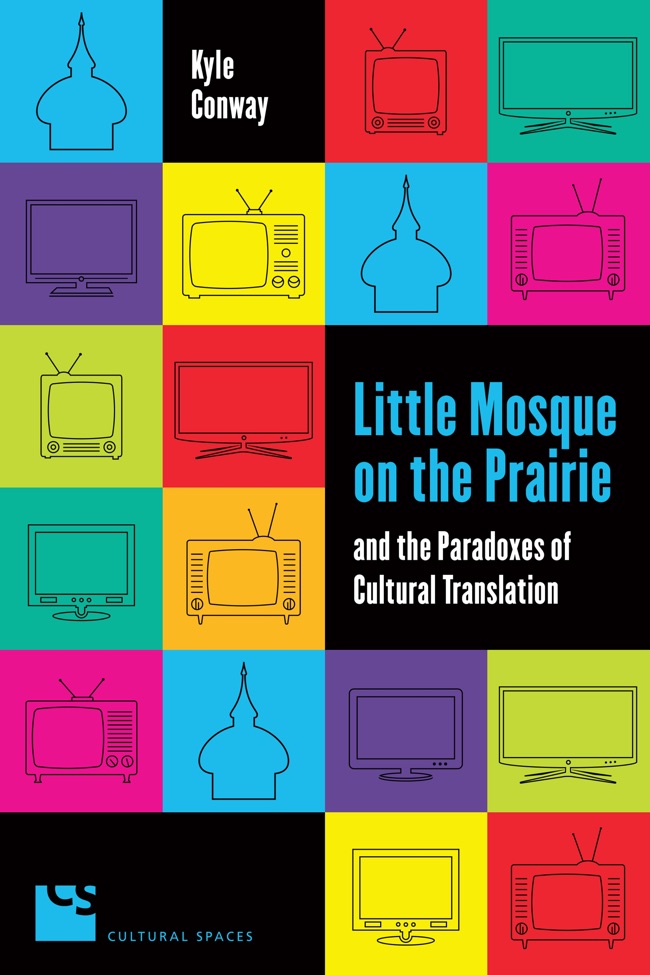 In all my work, I keep asking variations of the same question: how do we get to know people who seem different from us? I’m trained as a media scholar, and my first book was about translation between English and French in Canadian television news. (There’s a fascinating contradiction in news translation—journalists aspire to objectivity, but there’s no such thing as objective translation. So what happens when journalists have to translate speech that their viewers wouldn’t otherwise understand?)

This is my second book, and it’s about translation, too, but in a broader sense. It describes Little Mosque on the Prairie, a sitcom about a mosque community worshipping in the basement of an Anglican church that ran on Canada’s public broadcaster (the CBC) from 2007 to 2012. What happens, I ask, when a Muslim feminist living in Regina, Saskatchewan, decides to explain Muslims to non-Muslim viewers? That’s the show’s creator, Zarqa Nawaz. She teamed up with Mary Darling and Clark Donnelly, the executive producers from WestWind Pictures, who are motivated by their Bahá’í faith to tell stories that illustrate the oneness of humanity. The three of them (along with the rest of the team they assembled) wanted to do something new: not just make viewers comfortable with people they saw as different, but also make a commercially viable sitcom. That, too, is a contradictory task (viewers don’t want to feel like they’re being lectured to, so the producers had to walk a fine line), and I wrote the book to ask what they did to accomplish it.

The executive producers wanted to explore what they saw as the dichotomy between religion-as-culture and religion-as-belief. (I know that religious studies scholars have described the ways this binary opposition breaks down, but what mattered for me was the way the makers of the program thought about what they were doing.) They wanted to explore the beliefs that grow out of the experience of faith and shape how people act. But they faced frequent resistance from network executives who tended to subsume religion under the category of culture. (This is not uncommon, especially among policymakers for whom the idea of culture is an overarching organizational principle.) In the end, I don’t think the producers went as far as they would have liked, but they did spend the last season of the show exploring questions of belief, something that I have never seen in any other sitcom.

As I did the background research, I found three books that became models for what I wanted to do. The first was Evelyn Alsultany’s Arabs and Muslims in the Media (NYU Press, 2012), which presents a careful account of the textual logics of contemporary U.S. news and television drama. She proposes the idea of simplified complexity, or the “representational mode that has become standard since 9/11 [that] seeks to balance a negative representation [of Muslims] with a positive one.” This idea had a direct influence on my formulation of the paradox of salable diversity.

The second was Mucahit Bilici’s Finding Mecca in America (University of Chicago Press, 2012). What impressed me most was how Bilici turned a terribly abstract idea—the affective phenomenology of space—into something concrete such as the rituals of prayer as they shape people’s attachment to their home, especially when travel or migration alter their relationships to the places they call home.

The last book was a bit more obscure: Franz Volker Greifenhagen’s On the Way to Muslim-Christian Understanding (Chester Ronning Centre for the Study of Religion and Public Life, 2010). Most religious studies scholars who write about TV make some naive assumptions about how the medium works. Greifenhagen was a rare exception, and I borrowed many of his ideas about Little Mosque in my analysis of the show’s textual qualities. I suspect that media scholars writing about religion make equally naive assumptions, and I looked to his book for a model of how to be responsible to the different disciplines in which I was working.

I wrote the book from start to finish three times. Never have I revised something so completely. The last revision came in response to the peer reviewers’ recommendations. In the end, though, I was grateful for their feedback, which was thorough and generous and pushed me to name the central themes of the book more concretely. (I hadn’t introduced the idea of salable diversity—the key contradiction that underpins the rest of the analysis—until the final rewrite.)

Otherwise, writing the book was a real pleasure. Everyone I spoke to—Zarqa Nawaz, Mary Darling, Clark Donnelly, along with writers and various network executives—was generous to a fault. (And Zarqa is very, very funny!)

The book hasn’t been out too long, so there haven’t been many responses, but I was deeply touched by the kind words Franz Volker Greifenhagen wrote for the blurb on the back of the book.

Same question, different object of study. I live in Ottawa, Canada, but I’m from western North Dakota, which experienced an oil boom between 2008 and 2014 (and might experience one again soon). The town where my parents live, Williston, tripled in size, and suddenly everyone—longtime residents and newcomers alike—had to interact every day with people they perceived as different. This summer I’ll be in town to ask how those interactions shaped their sense of home and identity, and how their ideas about home (wherever it was) affected their perceptions of others.

Kyle Conway teaches in the communication department of the University of Ottawa. He writes about borders, both figurative and literal. He asks what tolls they exact when we cross them and what we gain in return. He is the author of two books, Everyone Says No: Public Service Broadcasting and the Failure of Translation (McGill-Queen’s University Press, 2011) and Little Mosque on the Prairie and the Paradoxes of Cultural Translation (University of Toronto Press, 2017). He has also co-edited several collections about life in the Upper Great Plains.

PrevPreviousOn Transitioning Out of the Academy: 7 Questions for Kelly Baker
NextComedy Central’s “Nathan For You”: Kafka for Late CapitalismNext