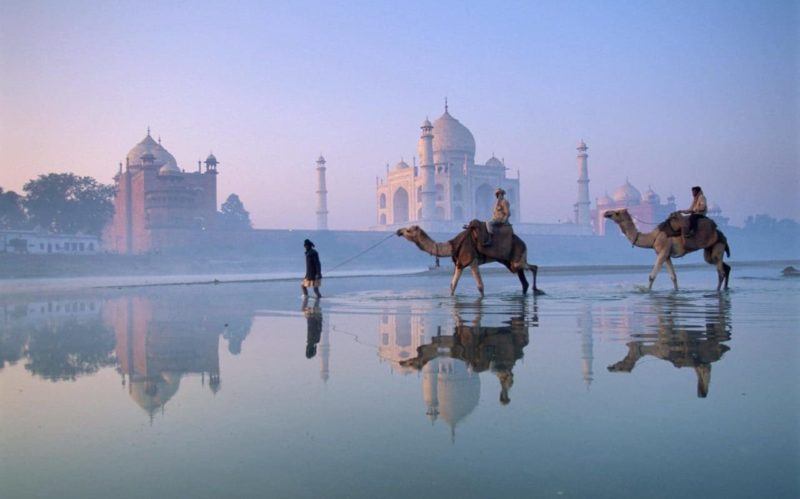 In our interview series, “Seven Questions,” we ask some very smart people about what inspires them and how their latest work enhances our understanding of the sacred in cultural life. For this segment, we solicited responses from Michael J. Altman, author of Heathen, Hindoo, Hindu: American Representations of India 1721-1893 (Oxford University Press, 2017). 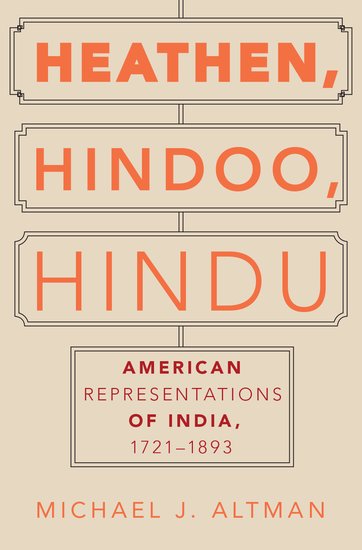 I started my MA degree at Duke University unsure if I wanted to study America or India. I was really interested in colonial India and postcolonial theory but I also liked the instant relevance of study American religion. As I took classes on both America and India I began to wonder if I could connect these two interests. One afternoon, while taking a seminar at nearby UNC-Chapel Hill, I was talking to Tom Tweed. “Someone should go look at all the stuff about India and Hinduism in early American magazines,” I remember him saying. And so I did. I found this 1875 Thomas Nast anti-Catholic cartoon in Harper’s Weekly titled “The American River Ganges.” Why would Americans in 1875 get the satire in this cartoon? What did they know about the Ganges? Why would India be connected to Catholicism? What is going on here? So, with the advising help of Leela Prasad at Duke, I wrote a master’s thesis that looked at representations of Hindus in three nineteenth century magazines. As I wrote that thesis I realized there was a bunch of material here that no one had really written about and so I decided that would be my doctoral dissertation. I went to Emory and wrote that dissertation and couldn’t have done it without the advice of Paul Courtright and Gary Laderman. Then I came to Alabama and turned that dissertation into a book. There have been a ton of changes, revisions, additions, redactions, and reimaginings since I began that master’s thesis but it all started with that question Tom Tweed and that cartoon from Thomas Nast.

I wouldn’t define religion. Instead, my work analyzes how others define religion. I am constantly asking “what’s at stake in this definition of religion?” and trying to trace how and why people construct their definitions of religion. Most often in my work, “religion” functions as a category for building boundaries between “us” and “them.” Similarly, “the sacred” most often appears in my work as something that functions to bolster or maintain group identity. For me, “religion” and the “sacred” are always embedded in conflict and my work tries to analyze that conflict and reveal what is at stake in those conflicts.

First, I’d want readers to understand that when “we” talk about “them” over there (whether in India or, say, the Middle East) we are really talking about what it means to  be “us.” When Americans described, imagined, and represented “heathens,” “Hindoos,” and “Hindus” they were really making an argument about what it meant to be “American.” We still do this. It’s how group identities work.

Second, I’d want readers to understand that “Hinduism,” like all so-called religious traditions, is not a stable category. (“Christianity” isn’t either, but that’s a whole different book.) What we understand as “Hindusim” today is a modern concept that emerged through a complicated historical process of encounter, colonialism, exchange, and conflict. I use the very small case study of Hinduism in America to try and get at this much larger and more complicated situation.

Third, “religion” is a modern concept that is meant to address specific modern questions that bothered Europeans beginning in the 17th century. Every chapter of Heathen, Hindoo, Hindu can be read as a case study of people working with and within the European category of “religion” to achieve their desired ends. So the various American representations of India shaped what would count as “religion” in America.

Because this book evolved over a number years and has pasts lives as a thesis and dissertation, I was inspired and influenced by a variety of folks at different moments. Edward Said’s Orientalism was foundational to my thinking about the politics of representation, as was Richard King’s work, especially Orientalism and Religion. Tom Tweed’s work on Buddhism in the nineteenth century paved the way for me to look at India during the same period, even if I went about it in a different way. Russell McCutcheon, Steven Ramey, and Merinda Simmons, my colleagues at Alabama, influenced the transition from dissertation to book. Conversations with them pushed me to pay more attention to the different categories used to describe Indians (heathen, Hindoo, Hindu).

The hardest part was confronting the feeling that I was leaving stuff out. There’s a lot of places one could look to write about India in the American imagination during the nineteenth century. This book is not exhaustive. I don’t deal with Walt Whitman at all, for example. But I think this book clears some space and opens up the field for more books to fill in the gaps. My greatest hope is that in the next decade some graduate student will write a dissertation that labels my book incomplete and seeks to fill in the massive holes I left behind.

An early version of the manuscript got a one paragraph response from a peer-reviewer who disagreed with my argument that “Hinduism” is a recently constructed category and not a long-standing world religion. The argument over the status and usefulness of “Hinduism” as a category still roils, it seems. That said, I have had some early interest from Hindu-Americans who want to know more about the history of India in America. I hope they find something helpful or interesting in the book.

I have two projects that are in the very early stages. First I’m working on a cultural history of Mohandas Gandhi in America. As with this book, I’m interested in the ways Americans imagined and represented Gandhi from the 1930s through today. I’m also working on a very meta-level genealogy (or maybe it’s a historiography?) of the connections between American Religious history, Christianity, liberal political philosophy, and the English Civil War.

Michael J. Altman is Assistant Professor of Religious Studies at the Univeristy of Alabama where he researches religion in American history, Asian religions in America, colonial India, and theory and method in religious studies. He is the author of Heathen, Hindoo, Hindu: American Representations of India 1721-1893 (Oxford University Press, 2017).