In our interview series, “Seven Questions,” we ask some very smart people about what inspires them and how their latest work enhances our understanding of the sacred in cultural life. For this segment, we solicited responses from Joseph O. Baker and Buster G. Smith, co-authors of American Secularism: Cultural Contours of Nonreligious Belief Systems (New York University Press, 2015).

In delving deeper into the sociology of religion as a subfield, we were struck by an interesting split in the discipline. On the one hand you have numerous classic texts on theory, both historical (Weber, Durkheim, Marx, etc.) and more contemporary (Berger, Luckmann, etc.), addressing the topic of secularization. There is much that is said about the causes and consequences of secularization, but little to nothing in the way of empirical assessments of the ideas discussed. To use (slightly ironically) some language from Peter Berger, secular individuals were “taken-for-granted” in secularization theories.

On the other hand there are lots of empirical studies of religion, many of which use theoretical ideas very different from or even directly counter to those found in secularization theories. For instance, in contrast to work on secularization, “rational choice” approaches to the study of religion basically omit secular individuals from their theories all together, and instead assume an innate human need for religion. Evolutionary psychology often does the same. Here secular people are “assumed away.” 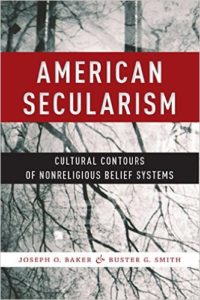 In these disputes about how to study religion in the contemporary world, the United States became the most widely cited case used to challenge secularization theories. So we were looking at these divergent literatures, and also watching the steady increase of people in the U.S. saying they have “no religion” in trend data. Secularization theories pointed to modernization and economic development as driving increasing secularity, but the U.S. was not suddenly more economically advanced in the 2010s than it was in the 1980s. Rational choice theories pointed to changes in “religious supply” as driving rates of religiosity, but there was no significant change in the “supply” of religion in the U.S. across the period of change. Turns out it’s still pretty easy to find a religious organization in America… So we had an ongoing, important story of religious change with competing—and ultimately not very convincing—ideas about why this was occurring.

We decided to approach the study of nonreligion in general and the changes occurring in the U.S. specifically from an inductive, empirical, and cultural perspective. What do the data say about the increase in people saying they have no religion? What do secular individuals themselves say about their belief systems? How are different types of secular individuals similar to or different from each other and actively religious people? This allowed us (we hope) to say something new and interesting about the changes occurring in American culture over the last forty years. At the same time, we can use the case study to address some of the theoretical disputes in our field from a different perspective.

Empirically, we look at secularity in terms of theistic dis- (atheism) or non-belief (agnosticism), but also in terms of choosing not to be affiliated with a religious tradition or organization while retaining some type of theistic belief, a grouping we refer to as “nonaffiliated believers.”  We also look at people who affiliate with a religion and believe in God, but do not attend religious services or pray privately, which we refer to as (non-practicing) “cultural religion.” So in all we look secularity and religiosity in terms of theistic belief, organization affiliation, and ritual practice.

In terms of what is sacred in the lives of nonreligious Americans, this clearly varies from person to person, but there are some notable patterns. Freethought and scientific inquiry are held sacred by many non-theists, as are humanist ethics. The recent trend of being “spiritual but not religious” is also concentrated among nonaffiliated believers, so there we find the sacredness of the self, spiritual journeys, and sometimes even paranormalism. In terms of important values, secular Americans, disproportionately, in relation to other religious and social statuses, value gender and sexual equality, as well as environmentalism. Other issues of the sacred will arise within individual narratives of secularity.

Ultimately we use the study of nonreligion as a way to critique the two dominant definitions of religion used by scholars. Substantive definitions of religion, which focus on supernaturalism as the defining aspect of religion, omit both non-supernatural religious traditions and assume the sacred cannot be found in this-worldly ways. The functional definition of ultimate meaning is more useful because it opens up topics of study beyond organized religion. The downside here is that we are forced call something like atheism a religion to study it as ultimate meaning-making. This is highly misleading and would be clearly rejected by the people we are studying. Instead, we propose the broader umbrella concept of “cosmic belief systems,” within which we find organized religions, non-institutionalized supernaturalism (the “paranormal”), and secularisms. This would effectively broaden the field of inquiry for fields “of religion,” such as psychology, sociology, and religious studies to include all three of these issues within their scopes of inquiry.

First: Secularisms are quite diverse. We outline four general types that we use, and others can use, to assess population level survey data: atheists, agnostics, nonaffiliated believers, and the (non-practicing) “culturally religious.” But beyond these general categories, identity narratives of secular individuals vary widely.  We provide case studies of the beliefs of three historical secular intellectuals, as well three in-depth interviews with prominent contemporary secular Americans to illustrate some of this diversity. There can be still other themes highlighted within the recent increase in religious nones, such the “spiritual but not religious,” apostates, socialized seculars, affiliated nonbelievers, “firm” or “soft” atheists, and so on.

Second: The increase in Americans claiming no religion over the past forty years reflects changes to the political meanings of “religion” and the involvement of religious organizations on the political Right. The vast majority of the increase in Americans claiming “no religion” is among the nonaffiliated believer category.  In effect, the trend in the U.S. is against organized religion, while supernatural disbelief still remains relatively rare.  We track measures of political polarization and issues involving sexual politics across the period of the increase and find that increasing polarization and increased activism by the religious Right on issues of sexuality sync perfectly with the increase in secularity, and that religious nones are overwhelmingly politically progressive on matters of sexuality.  So this is a big part of the story that is often missing in discussions about the “rise of the nones.”

Third: Those of us involved in studies “of religion” should broaden the scope of what we study and critically evaluate many of our existing theories about religion and the sacred. There are two important sub-points here. First, as we noted, people in fields involving religion should also study secularities and non-institutional supernaturalism (the “paranormal”). Further, any good general theory “of religion” should account for both of these topics, else it is necessarily narrow and incomplete. As part of all this, there is an emerging debate about whether “secular studies” should be done parallel to, or along with, religious studies. We favor the latter. Although secularities are distinct from religiosities, there is no sense in completely reinventing the wheel to study secularities. Second, many of our theories of religion in the social sciences are shockingly devoid of cultural considerations. Again, a good general theory must incorporate culture. Religion is cultural. So are secularities. Culture is everything.

We drew inspiration from the historic intellectuals we profile in the book: Frances Wright, Lester Ward, and W. E. B. DuBois.  Each led a fascinating and influential life, and they were all persistently curious and courageous in their own ways. More importantly for the work itself, our mentors Chris Bader and Paul Froese are both empirically rigorous and theoretically minded sociologists. We tried to emulate that model. Tony Pinn, the editor of the Religion and Transformation series at NYU, was very encouraging of our work and also gave us the latitude to pursue the study as we saw fit.

There’s too much to say and do on this topic for a single volume. Because so little has been done empirically in this area, there are a wealth of topics worth investigating. In some cases we were only able to scratch the surface of extremely interesting areas of inquiry. In essence, we tried to outline the most important baseline sociological patterns of secularity in the U.S., focusing on politics, race and ethnicity, social class, and gender and sexuality; but even the topics we covered deserve further and more nuanced investigations. Ultimately we tried to put together a volume that displayed a diversity of perspectives, data sources, and subjects related to secularities, in the hopes that others will pick up and further develop many of the themes we touch upon.

For the most part other researchers in our field have been positive. Some non-theists object to us classifying their belief systems as “belief” at all, arguing instead that atheists’ view of the world is demonstratively rooted in objective facts, while beliefs are argued as being taken without evidence. For instance, there is a review of the book that spends most of the time arguing for this position. While we understand the objection and distinction being made, we think secularities can be fruitfully understood as a particular type of belief system, but a belief system nonetheless. Further, empirical studies of rhetorical tropes denying that secularities are belief at all, thereby elevating them to positions of exclusivity and righteousness, deserve study as a novel but important form of belief system exclusivism.

As soon as we finish updating and making additions to Paranormal America for a second edition, Chris Bader and I (Joseph) are completing a long-standing project that outlines and tests a parsimonious but powerfully predictive theory of deviance “management,” meaning the strategies individuals or groups use to combat social stigmas from engaging in activities considered culturally deviant. The project is more within the realm of deviance and criminology, but also includes case studies from religion and paranormalism. In some ways it is a departure from my research on religion and secularity, but in others ways it is an elaboration of the main ideas present in all my work.

Joseph O. Baker is Assistant Professor in the Department of Sociology and Anthropology at East Tennessee State University and a senior research associate for the Association of Religion Data Archives.

Buster G. Smith is Assistant Professor in the Department of Sociology at Catawba College. He is the co-author of Grounding Our Faith in a Pluralistic World.

PrevPreviousAccelerating the Contradictions with the Coen Brothers
NextFrom Sophia to Silicon: The Materiality of InformationNext