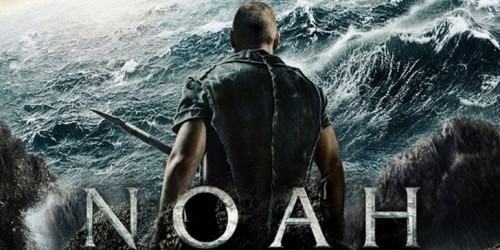 The editors of Sacred Matters appreciated my comments on the film Noah in the video above, and they asked me to set it in context for their readers.

What is included in this clip is just a short section of a much longer interview. I don’t offer a review of the film itself, whether it’s better than “the book.” My aim is rather to challenge the vocal criticism of the film by the religious right. I claim that it’s perfectly legitimate for the film’s creators to embellish the biblical story and to take it in new directions.

For one, such conscious creative reworking is indispensable to good art. Additionally, the biblical authors and those that follow in their wake are themselves reworking inherited tradition.

Long before the stories of the Bible ever saw the light of day, there were stories told in Mesopotamia about the flood, and we have many witnesses to their varied forms. Just this January, a new cuneiform tablet was revealed to the public that describes animals going two-by-two in a (round!) ark to escape the flood.

The Mesopotamian accounts present the gods getting upset by the commotion caused by humans, whom they created to do their labor. The gods decide to wipe humans out through a flood. Only later do the gods find a way to deal with human overpopulation by creating a new kind of creature—one who will not be fertile, with women who cannot bear children or who will be consecrated to the gods, with demons who will snatch infants away and cause miscarriages, with earlier deaths, etc.

The biblical authors preface the flood story with the problem of overpopulation, describing the primordial time when “humans began to multiply on the face of the earth.” Because the humans join with divine beings and give birth to superhuman heroes, Yahweh responds by taking his spirit from them and setting a limit (120 years) on their lifespan. The biblical flood story itself, however, has less to do with overpopulation. What elicits the decree of destruction is human “wickedness.” Yahweh regrets having made humans and decides to “wipe them out,” along with all animals. Another version of the ark story, which has been spliced together with a separate narrative, names a somewhat different reason for the flood: God (not Yahweh) sees that the earth is being “destroyed” or “corrupted,” and that it is “filled with violence.” As the earth is being “destroyed” by humans, God decides to “destroy humans along with the earth.”

Both reasons for the flood in the biblical account relate to unethical human conduct rather than natural human behavior as in the Mesopotamian versions. Thus, to appreciate what the biblical authors are doing, one must study how the authors reshaped earlier traditions (even if we cannot always be sure about what the biblical authors knew). And the same goes for the interpretations of the biblical account that we find in the New Testament and in rabbinic sources, along with many related extra-canonical writings. Each group and generation of authors takes their point of departure from assumptions and concerns of their own time. To be conscious of these assumptions and concerns is indispensable to the task of being a good interpreter and a good artist.

When we come to Aronofsky’s Noah, almost every aspect of the film draws on this history of interpretation (pre-biblical, biblical, and post-biblical) and it does so self-consciously. When pundits, critics, and commentators, including biblical scholars, point to places where the film charts its own path, they usually err, revealing their ignorance of this history of interpretation (and especially of the Jewish sources). It’s fully legitimate for the film’s creators to do something completely new with the Noah legends. But in this case, they have not. They have instead immersed themselves in the text itself, the Mesopotamian material that it presupposes, and the various streams of interpretation that it spawned, while all along synthesizing original blends and producing distinctive nuances. Their creative endeavor can be traced all the way back to Aronofsky’s prize-winning high-school poem on the dove of the flood.

Aronofsky’s movies are difficult. They are not for the faint of heart. One of the most disturbing aspects of Noah is Noah himself. In many ways the movie is about a male figure who claims unique access to the divine will, on the one hand, and the opposition he faces from those around him who follow their moral reasoning, on the other.

The critical depiction of Noah is not Aronofsky’s own creation. The rabbis find it repulsive that Noah obeys God rather than resists the divine decree of destruction. A midrash tells how Noah, when he disembarked from the ark, witnessed the carnage that God had wreaked on the world. He weeps and demands to know why God had not pitied his children (humans). The deity responds: “You dumb shepherd. Now you urge me to be merciful? Why didn’t you do this when I first told you about the flood? If you had done so, it would not have come to pass. But you knew you would be rescued and didn’t care about the others. And now you’re praying to me!” According to this line of interpretation, Noah’s sacrifice, described in the Bible, is the atonement for his sins. Yet God still punishes him: After Noah plants a vineyard and discovers alcohol as a means to numb his psychological pain, his son Ham abuses him. Noah may have been righteous in his generation, but because his generation was so evil, his righteousness would have been negligible in any normal time. And God first decides to destroy all humans (Gen 6:7); only later does Noah do something to find favor with the divine judge (Gen 6:8).

Finally, what about the film’s ecological message? It seems like quite a jump from the biblical account. But here again, the film’s creators are hewing closely to the biblical contours of the story and following a prominent strand of interpretation. The biblical text combines two independent accounts of the flood, and it has been supplemented at various points with extra material. Its various messages are in tension. One of its sources, as I noted earlier, describes how God decides to destroy the world because it is “filled with violence” and “is being destroyed.” The other version describes the “wickedness” of humans that causes Yahweh to rue his creation of humans (not the animals). Yet he decides to wipe out them along with all the animals. (After the flood, God allows humans to eat animals yet prohibits them from imbibing blood.)

According to one line of rabbinic interpretation, the animals must have been involved in misconduct. But according to another one, they had done nothing wrong and it was a vexing question as to why they had to be destroyed. Here is where Aronofsky’s film digs in and finds a lot of traction in the text and a number of its interpreters. If the movie in this respect seems too “New Agey” and too attuned to contemporary environmental concerns, it may be because such concerns are at the heart of the biblical account. If humans are divinely mandated to care for the earth, then their vile actions can also bring about its destruction.

That fear about the fragility of our existence, that cosmos could devolve to chaos, pervades so many legends of the flood from various times and places. And more than any cultural memory of a flood, it is what gave rise to these legends.